What's your songwriting process? (+ Other Things We Want to Know!)

Usually, I get started by doing something physical -- riding my bike, doing the dishes, taking a shower, driving the car, sewing, gardening. Any activity where my hands are busy allows me to think freely.

I’m constantly singing in my head, but a line will come to me that’s inspired by something else. Sometimes that line will stick with me for months or years before I even write it down. When I hear the words, or lyrics, I hear them with the melodic line. When I finally do write it down, it sometimes becomes a completely different song. That’s very early in the process.

When I sit down to write the song it’s because I have a deadline or I’m inspired by something or the line is persistent in my mind and wants to be written. I don’t know how else to explain that.

Then, I make some notes. (Some of my notes for Northern Daughter are below.) I make a list or write a free verse poem with no particular shape. And I pick up my guitar and structure song lyrics to fit whatever meter, or lyric form, or mood I have going on in the song that’s taking shape.

I like to work in many genres: folk, rock, blues, ragtime, Bossa Nova, jazz, rockabilly, and I have one Ukrainian folk tune. (I’ll have to tell that story some other time.) I also like to sit down and work out chord progressions and melodies with an idea in mind. I’m sure it’s awkward to watch me sitting there, juggling my guitar, a pick, a pencil, my notebook and sometimes my laptop too. I often record bits on my iphone as I go along too, so I don’t forget them. 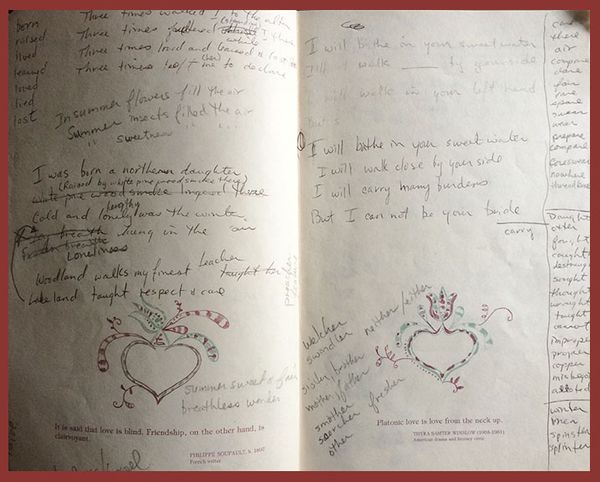 Once the song is roughed out, I might play it live if I can. I might play it on the phone for people. I might shelve it for awhile if it doesn't feel done. I often go from one song to another as part of my creative songwriting process.
2. What types of things inspire you to write?

I’ve written songs about relationships -- new love, old boyfriends. I wonder about people I’ve known and what they are doing now. I also write about people in my life who ask for my advice but then ignore the advice I give them! My frustration sometimes becomes a song. I’m inspired by the nature of things and people, like the process of growing up or growing older. I read a lot about self-awareness, and I also write about it. I am inspired by fun and nonsense too, and I love irony. Who doesn't?

3. How did the song Northern Daughter come about?

I wrote and recorded the song Northern Daughter as a demo in 2005. It was basically an account of my own life as a northern daughter. I grew up in two rural areas, Baptiste Lake north of Bancroft and Courtice just north of Lake Ontario.

I was recently divorced and living on my own for the first time in my life—no kids, no husband. I had a dog. That was the best relationship I’ve ever had. (laughs) I was probably having an identity crisis at the time. I was asking myself, “Who am I, and where do I come from anyway? And how the *bleep* did I end up here?”

At the time, I was also rebound dating and within two weeks my rebound boyfriend had asked me to marry him. I was sure I never wanted to marry again, but I was also inspired and wrote three songs in three days. Suddenly the lyric, “I was born a northern daughter,” fell out of the sky.

I decided at the time, I would try to write a two-chord song. It was an ironic homage to the late Ken Palmer (the long-time Artistic Director of Home County Folk Festival in London) who was my friend and mentor. About ten years ago, while I was singing in the trio Sirens, Ken had given us some advice about playing with other musicians at jam sessions and festivals. He said, “Your songs have complicated harmonies, complicated chord progressions and too many chords. Other musicians can’t follow you.” So writing Northern Daughter started out as an exercise in writing a two-chord song in the style of Johnny Cash and an old folk-country tune.

Once I started that process, picked up my guitar and started playing with two chords—A minor and E7—the song sort of tumbled out.

The song isn’t a true autobiographical account. My parents never gave me the advice I give myself in the song. In some ways the whole point of the song was to get to the message of the last verse, which is the answer to the marriage proposal: I will bathe in your sweet water. ​I will walk close by your side. I will carry many burdens, but I will never be your bride.

4. How did the idea to turn Northern Daughter into a play evolve?
The idea first occurred to me at my brother's place. And originally I intended to write a one-woman play based on the life of a girl who grows up in the bush. I didn’t intend to write the play with music that Northern Daughter has become.

So, I was at my brother’s place, northeast of Toronto. We were sitting on the grass, with canoes and paddles all over the place, resting after moving a bunch of gear around. That was where I first had the idea to write the play. I felt that even though not everyone has had the same experiences I had growing up in rural Ontario, on the lake, everyone could relate to a story set in the Canadian bush. It’s very different growing up rural where you learn about nature and the environment, where you play around water and learn how to grow your own food and how to survive.

You learn different things growing up in the city.

5. Is the play Northern Daughter autobiographical at all?

My own story is way too long, much too complicated, and has too many people involved to perform over an hour in a one-act play. So the play that started to emerge from my memoir stories became much more fictional as it evolved. I was having a lot of fun as I developed the characters, and I started to use a lot of creative license. I amalgamated people that I knew into new characters. I also amalgamated the two rural communities I grew up in, blending them, as I envisioned the story. So, no, the play is not autobiographical in the sense of a memoir. But the story comes entirely from my own experiences and perspective as a girl growing up in rural Ontario.

If you have a different question for Donna about this show, post it in the comments: