“Josephine is gritty and exposed. Someone important has died, and she’s on a reluctant journey home. Just as the forces of nature are indiscriminate, Josephine has to make good on a promise she’s made. She knows that if you don’t respect the forces of nature, they can kill you. She knows she has to keep her word. But in the middle of the lake, she learns something unexpected about the forces of living. The audience steps into the canoe and makes this journey with her.” ~ Donna Creighton 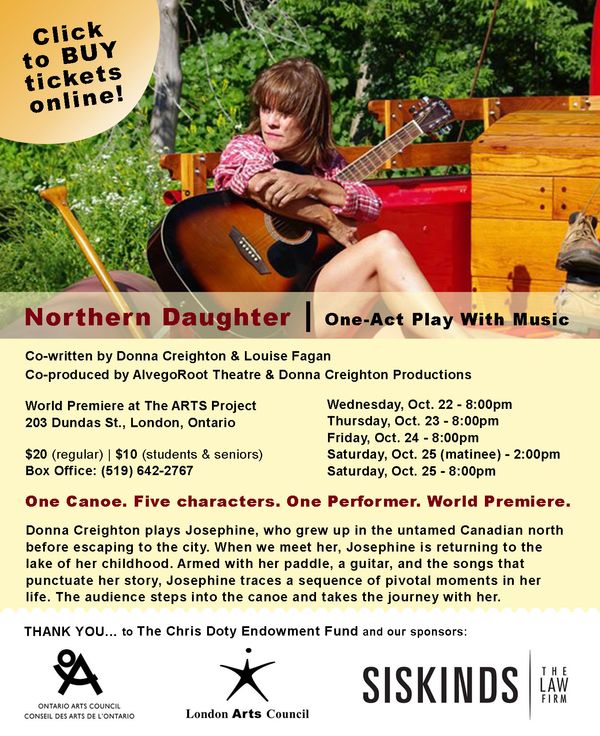 This is the story of Josephine, a girl who grew up in the untamed Canadian north before escaping to the city. The story is set in a canoe.
When we meet Josephine, she is returning to the lake of her childhood, armed with her paddle, a guitar, and the songs that punctuate her story. She recalls the colourful characters from her past and traces a sequence of pivotal moments in her life. Like the wilderness around her, Josephine is hardy and honest, at times poignant, then funny—quintessentially Canadian.

Co-produced by AlvegoRoot Theatre Company and Donna Creighton Productions, this show will round out AlevgoRoot's 2014 season with a world premiere at The ARTS Project theatre, London, ON. AlvegoRoot is an independent theatre company based in London, Ontario, that produces local plays about Southwestern Ontario, along with classical repertoire.